We are now halfway through our 21st Century Jewish Writing and the World series. We have been treated to some amazing events with two very thoughtful writers who care deeply about the world we inhabit and the relationship of Jewish people with that world.

On October 8th, we launched the series with the visit of Ruby Namdar. I had the privilege of sitting down with Ruby to discuss his latest novel, The Ruined House (2017), which had just come out in paperback. Before we began our discussion, Ruby read the opening paragraphs of the novel. He remarked that it is only when he reads out loud that he truly (still) feels like a foreigner in English. Despite this preemptive disclaimer, the author delivered a compelling reading of his own prose. For audience members who had not read the novel, it gave them a sense of the work. For those who had, they were able to momentarily revisit and reconnect with its timbre. Then, following a brief description of the plot and style of the novel, Ruby and I launched into a discussion that explored the genesis of the work, the central crises of the protagonist, the extensive citations of Talmud and other rabbinic texts that appear between the 7 “books” of the novel, the role of the female characters, and the significance of September 11th. Ruby described his view of New York City as a sacred space, the importance of transmitting the Temple narrative in its own language (with both the content and textual appearance of these intercalated pages mimicking that of the Tanakh, Talmud, or Mishnah rather than simply re-telling this story using the stylistic tools of the Andrew Cohen narrative that occupies the rest of the 528 pages), the relative import of the Temple for Israeli and American Jews, the character of Cohen as an unlikely and reluctant vehicle for visions of faith and the sacred, and the role of masculinity in the novel. Numerous questions were posed by those in attendance, which further explored aspects of The Ruined House and its significance for both its author and its readers. In the end, I felt that we examined the novel as a transformation of a tragic hero who, through degradation and despair, is able to evolve. The conversation also invited us to think about the work in terms of our relationship with the sacred, whether in the most rarified of holy places or in the most ordinary of quotidian landscapes. 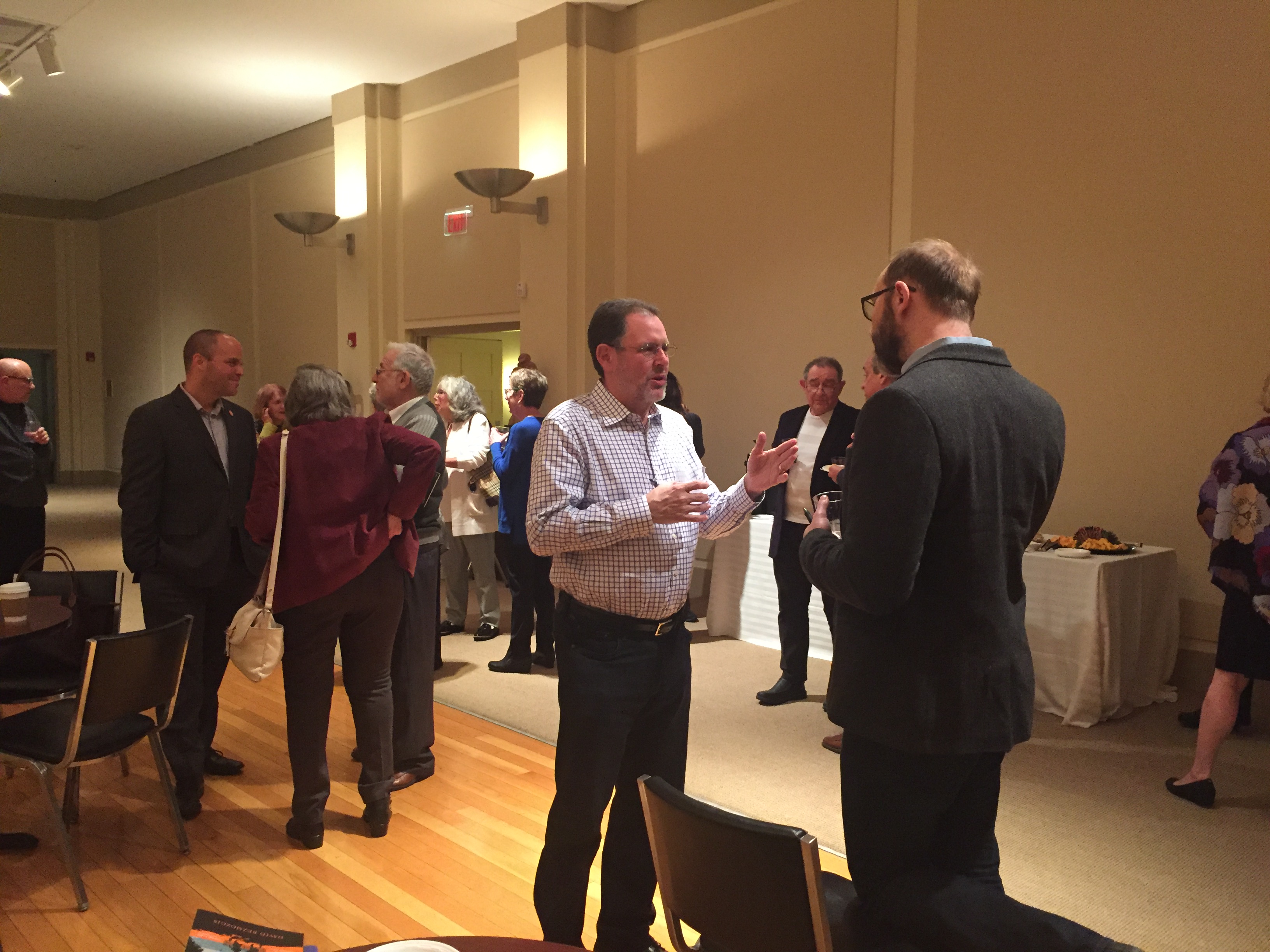 On October 22nd, we hosted David Bezmozgis. The title of David’s talk was “The Betrayers and Other Stories: Writing for the Page and the Screen,” and much of the presentation delivered on the promise of that title. He spoke extensively about The Betrayers (2015)—what it is about, what he was trying to do with it, and its relationship with other works he has written. He also outlined the process of adapting the novel for the screen, touching upon his criteria for deciding what form a particular story should take, whether or not to return to and adapt a published work, and some of the changes he had to make in order to transform a prose work into a cinematic text. Yet the talk ultimately was much more than the title might suggest. Indeed, in the opening moments of his presentation, David warned that we might be getting something slightly different than we had bargained for. In his remarks, he framed his reflections on The Betrayers in terms of larger questions of how he views his work, its significance, and—to some extent—its potential legacy. Among other things, the novel depicts what he would want his 3 daughters to know about their father if they were ever to read the novel. He spoke about trying to work through two fundamental questions as he wrote the material. Firstly, what does it mean to be a moral person? If we can conceive of a fundamentally amoral person—a sociopath or a psychopath, incapable of basic human emotions or of connecting with their fellow human beings—then doesn’t it follow that the opposite must also exist, that there must be people who are constitutionally incapable of maliciously inflicting harm on others? Part of the challenge of writing The Betrayers, Bezmozgis said, was seeing the world through the eyes of a morally superior character, one of stronger moral resilience than he can claim for himself (or, even, for most people). The second question that he hopes the novel illuminates is what nationalism means to us as human beings and why it has driven us, continues to drive us, in our relations with one another. Through his protagonist, Baruch Cotler, the author seeks to understand why human beings are so tied to the idea of the little piece of land beneath our feet. These are the questions that Bezmozgis grappled with in telling the tale 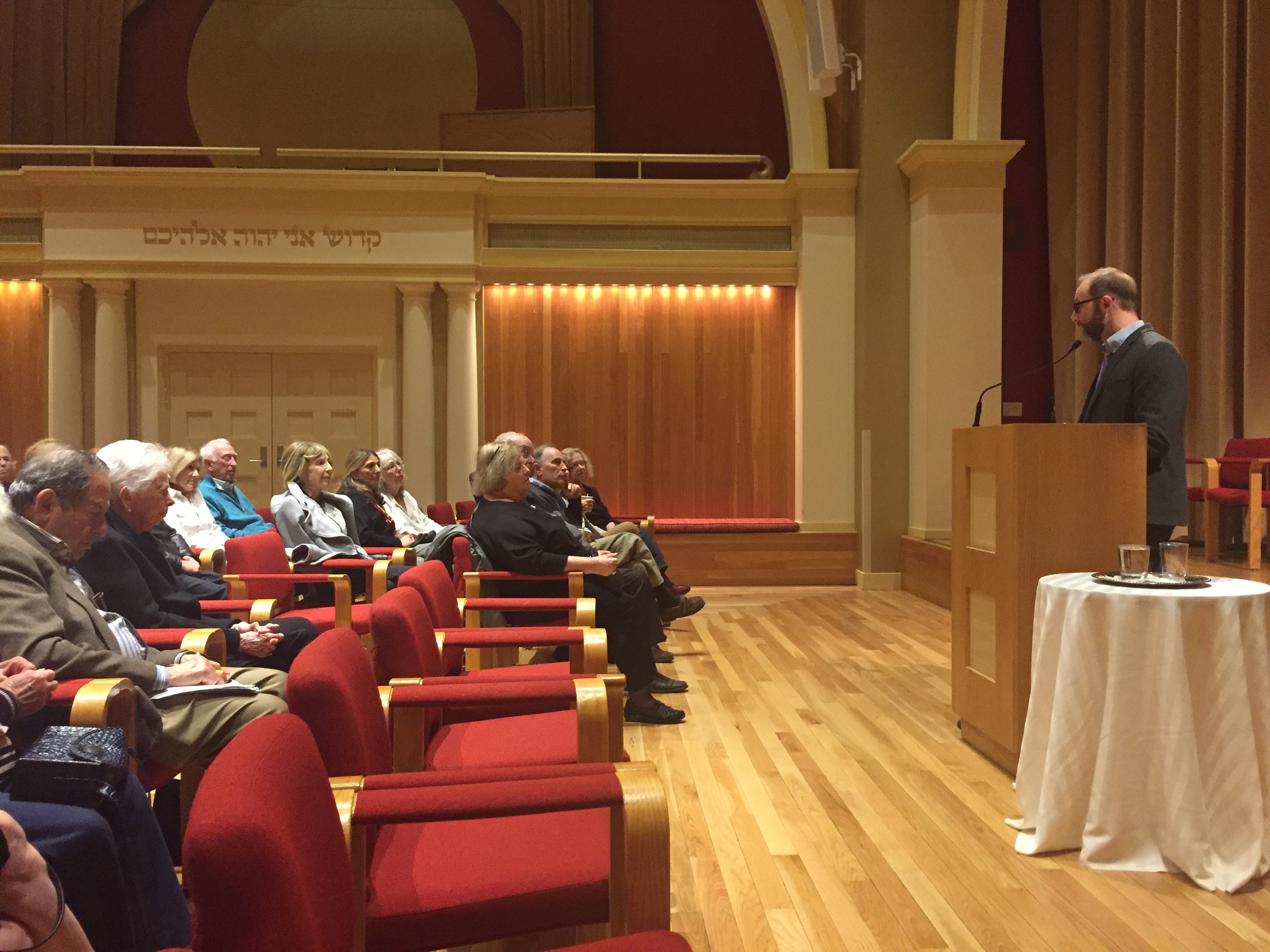 of The Betrayers, first as a novel and then as a screenplay. Referencing George Orwell’s Why I Write, David explained that he strives to write with a political purpose but without sacrificing aesthetic enthusiasm.

Through these two visits, we have grabbled with characters in crisis, and we have reflected on how particular narrative modes and forms advance (or impede) a particular story. At the same time, the conversations with Ruby Namdar and David Bezmozgis have highlighted connections with and across Jewish communities “from generation to generation” and around the world. What do the rituals of the priests in the ancient temple mean to us as contemporary Jews living in a secular world? What do our ancestral homelands—in and outside of Israel—mean to us, and to what extent does that meaning change over time? The examples of 21st Century Jewish writing and the world that Namdar and Bezmozgis offer have raised provocative and compelling questions about our relationship with the past, present, and future and how that informs both the stories we tell (and presumably also the ones we don’t tell) and how we tell them. Now, at its mid-point, the series is allowing us to explore what writers—and readers—are reaching for with and through the transmission of our tales.

Autographed copies of Ruby Namdar’s The Ruined House and David Bezmozgis’sThe Betrayers are available for purchase at the Illini Union Bookstore (in the “campus events” section on the second floor).

Please join us for the second half of the series. We will be hosting Ayelet Tsabari on Monday, February 25 and Nicole Krauss on Tuesday, April 9th. Tsabari will also be speaking at the Standard Club in Chicago on the 27th and Krauss will be speaking at Northwestern University on April 8th. Additional information is available at https://jewishculture.illinois.edu/21st-century-jewish-writing-and-world.