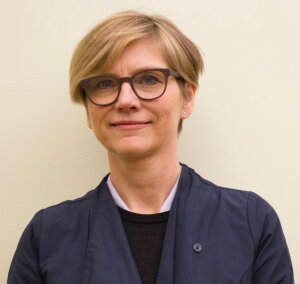 Anke Pinkert is a scholar of modern German literature, film, and culture, with a focus on memory studies and social activism. She received her Ph.D. from the University of Chicago, and has taught in the United States and Germany, including at the University of Chicago, Macalester College, and the University of Leipzig. She is an Associate Professor of German and Media & Cinema Studies, and Conrad Humanities Scholar for the College of Liberal Arts&Sciences. In addition, she holds appointments at the Russian, East European, and Eurasian Center, the Program in Jewish Culture & Society, and the Unit for Criticism and Interpretive Theory. Since 2009, she has collaborated with a group of scholars who co-founded the interdisciplinary Initiative of Holocaust, Genocide, Memory Studies at Illinois.

Professor Pinkert’s research and teaching is situated within two major tracks— memory studies with a focus on post-Holocaust and postcommunist Germany AND theories and practice of the Humanities. Paying particular attention to the aftermath of two turning points in modern German and European history, “1945” and “1989,” her scholarship examines aesthetic and political responses to collective feelings of loss and trauma. Her book Memory and Film in East Germany (Indiana UP, 2008) offers an understanding of how East German film transformed the historical experience of war violence and mass death into an elegiac public memory. She is currently completing a monograph entitled Remembering 1989: Future Archives of Public Protest.

Remembering 1989 challenges the dominance of the fall of the Berlin Wall and Germany’s unification in global memory in the last decades. The book argues, what has been entirely forgotten today, in the era of (post)neoliberalism, is the interval year of 1989-90 and its multifarious and nonviolent political protest movements. The study recalls this interregnum as a joyous and volatile “laboratory of radical democracy” in the late GDR. The project is supported by an IPRH New Horizons Summer Faculty Research Fellowship and the Center for Advanced Study.

In her second major area of inquiry, Anke Pinkert explores recent shifts in Humanities education, activism, and research. She is the co-leader of the IPRH research cluster on the "Public Humanities," and the Center for Advanced Studies multidisciplinary initiative on "Learning Publics." From 2009-2014, she served as a faculty affiliate of the Education Justice Project at the University of Illinois http://www.educationjustice.net, a collaborative of incarcerated and nonincarcerated teachers and students. EJP offers advanced college courses and extra-curricular programs at Danville Correctional Center in East Central Illinois.

At the University of Illinois, she teaches undergraduate and graduate courses on 20th/21st century German literature, film, and culture; critical theory; Holocaust representations; and mass incarceration in film and media.

Pinkert, A. (2022). Unsettled memory: Learning about the holocaust at a United States prison. In Transverse Disciplines: Queer-Feminist, Anti-racist, and Decolonial Approaches to the University (pp. 149-176). University of Toronto press.