The final events of the 2017-2018 year were a trio of wonderful book launches by Jewish Studies and Comparative Literature Faculty members Rachel Harris, Eric Calderwood, and Lilya Kaganovsky.

On April 24th, Rachel Harris discussed her book, Warriors, Witches, Whores: Women in Israeli Cinema. This book is a feminist 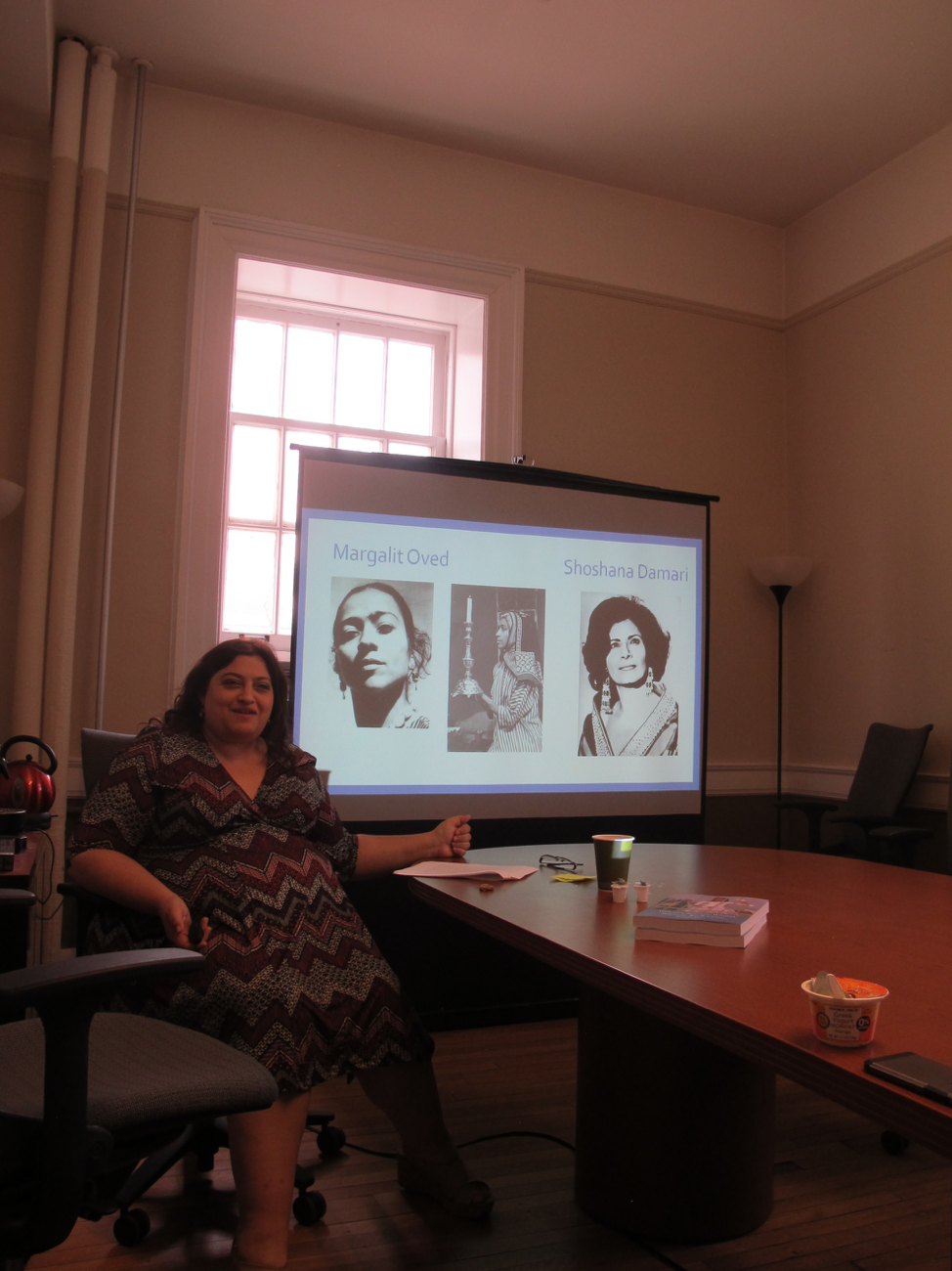 reading of women in Israeli cinema and Rachel showed slides demonstrating the history of women in Israeli cinema from the beginning of the nation until the establishment of a feminist collective and an interactive website devoted to feminist readings of Israeli film. “While no one can deny Israel’s Western women’s advancements, feminist filmmakers frequently turn to Israel’s less impressive underbelly as sources for their inspiration. Their films have focused on sexism, the negative impact of militarism on women’s experience, rape culture, prostitution, and sexual abuse. These films also tend to include subjects from society’s geographical periphery and social margins, such as female foreign workers, women, and refugees. Warriors, Witches, Whores is divided into three major sections and each considers a different form of feminist engagement. The first part explores films that situate women in traditionally male spheres of militarism, considering the impact of interjecting women within hegemonic spaces or reconceptualizing them in feminist ways. The second part recovers the narratives of women’s experience that were previously marginalized or silenced, thereby creating a distinct female space that offers new kinds of storytelling and cinematic aesthetics that reflect feminist expressions of identity. The third part offers examples of feminist activism that reach beyond the boundaries of the film to comment on social issues. This section demonstrates how feminists use film (and work within the film industry) in order to position women in society. While there are thematic overlaps between the chapters, each section marks structural differences in the modes of feminist response.” http://www.wsupress.wayne.edu/books/detail/warriors-witches-whores

Then, on April 25th, Eric and Lilya discussed Colonial al-Andalus: Spain and the Making of Modern Moroccan Culture (The Belknap Press of Harvard University Press, 2018) and The Voice of Technology: Soviet Cinema’s Transition to Sound, 1928-1935 (Indiana University Press, 2018). These two books, although on completely geographically and historically distinct topics, are both about inventions or constructions. After a lovely introduction thanking all of those who helped him and all of the many interlocutors he encountered in his research, Eric discussed how al-Andalus (medieval Muslim Iberia) became the centerpiece of Moroccan identity. As he put it, “you can turn over a rock and al-Andalus pops up.” There is Adalusi music (a completely fictive construct), 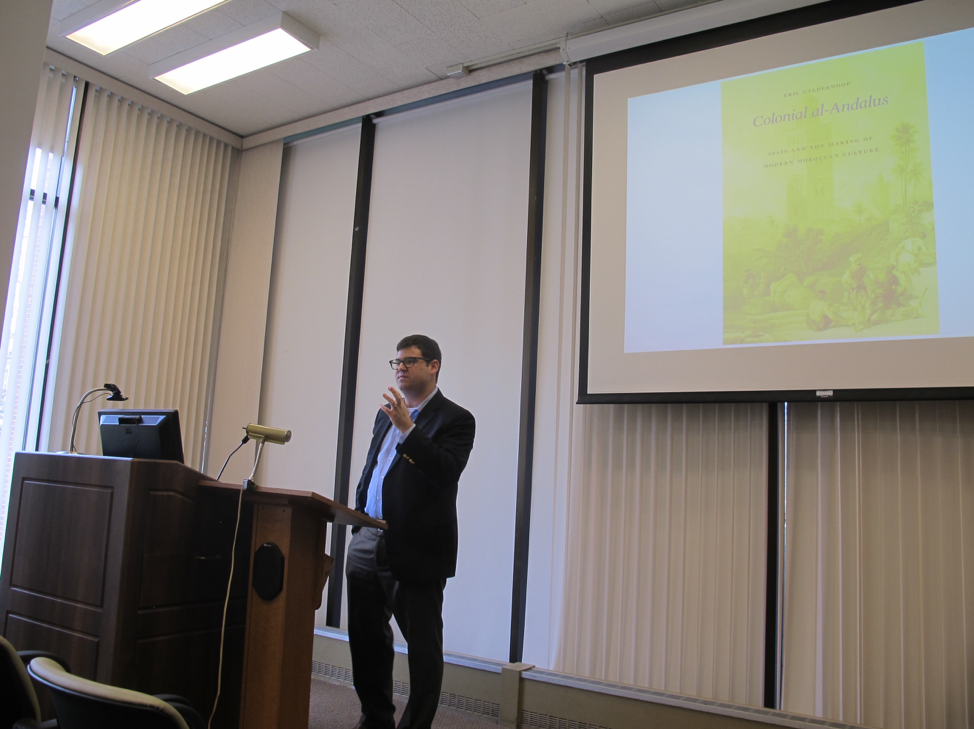 there is a huge Adalusian tourism industry, there are films, books, etc., dedicated to al-Andalus. But, Eric argues, al-Andalus is in fact a modern invention and came about because of Franco’s calls to claim a certain Morocco. “The Spanish way of talking about Morocco became the Moroccan way of talking about Morocco,” he argues and, further, the “Spanish were the victims of their own success.” He described how the relationship with Colonial history migrates and takes on new ideological contours. Eric’s book argues that “Morocco’s Andalusi identity is a product of the colonial encounter between Spain and Morocco.” And, further, that colonialism and anticolonial nationalism “often work two sides of the same coin, reinforcing each other and reproducing each other’s logic.” This envisioning of both sides of the coin unseats French colonialism as the centerpiece of Moroccan colonial history. By re-writing the story of Moroccan colonialism in this way, Eric’s book reconfigures our conceptions of long-held binaries such as Europe and Islam.

The audience had many questions including about the origin of the word “al-Andalus.” So, apparently, it is often interpreted as an Arabic word and that it may well be but it could also possibly be a Visigoth word. Another audience member asked about the archival practices in gathering materials and Eric answered that the Spanish texts pertaining to al-Andalus were mostly exported to private libraries in Spain whereas the Arabic texts largely remained in Morocco. It is clear this book is poised to make a big impact on multiple fields.

Then Lilya turned to The Voice of Technology: Soviet Cinema’s Transition to Sound, 1928-1935 (Indiana University Press, 2018). This is her second book, preceded by How the Soviet Man Was Unmade (University of Pittsburgh Press, 2008). Lilya has also co-edited several volumes and published many articles which illuminate the range of her scholarship. The Voice of Technology traces the transition in Soviet cinema to sound from 1928-1935 and articulates how the belated transition actually allowed for creative uses of sound in multiple languages. The prominence of Stalin was linked with the emergence of sound. The Soviet Union was projecting itself as a multilingual, multicultural utopia in which were unheard capitalist side effects such as racism. Of course, the reality was quite different. But the cinematic imaginary in these early sound years bolstered this utopian view. At the end of her talk, Lilya presented clips from a most fascinating film, The Return of Nathan Bekker (1932). In the film Nathan Bekker, a Jewish 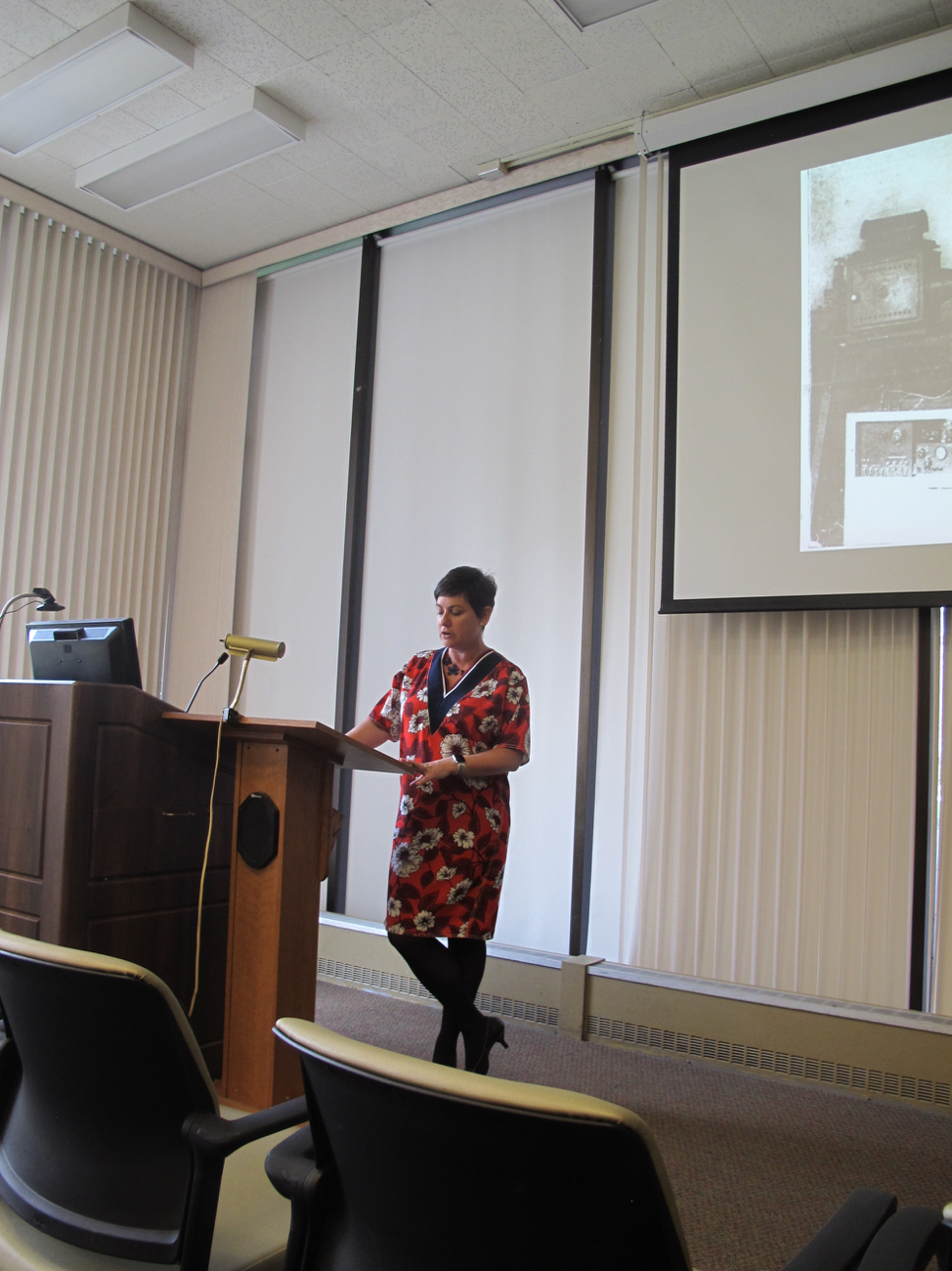 character from a shtetl, returns after 28 years as a bricklayer in America. With him he brings Jim, a fellow traveler who has come to inhabit the Soviet utopia. Jim is black and, after registering a momentary silent surprise, Nathan’s father simply asks, “Is he Jewish?” and then welcomes him and ushers him into his hovel. Lilya described how the film was released simultaneously in Russian and Yiddish and how the interactions between Jim and Nathan’s father Tsale (played by Solomon Mikhoels) express a “remarkable conflation of Yiddish and African American culture, with Tsale clearly adopting Jim as a fellow Jew.”

Lilya received many questions from her engaged audience about her archival research and about the nature of Soviet film. When she began researching the book most of the films were only in Russian archives. Now, most of them are readily available on youtube. Lilya’s book offers an important intervention into film history and Russian and Soviet cultural studies and will be of interest to scholars and students in many disciplines.

We will continue the tradition of book launching next year, starting at noon on Friday September 7th in 109 English with the launch of Dana Rabin’s Britain and its Internal Others, 1750-1800: Under Rule of Law.